Boston chef Ian Maschal is behind the wheel of his latest venture: a pizza trailer parked outside of an Upper Falls wine store.

Devoted foodies and restaurant newbies love The Feed. Sign up now for our twice weekly newsletter. 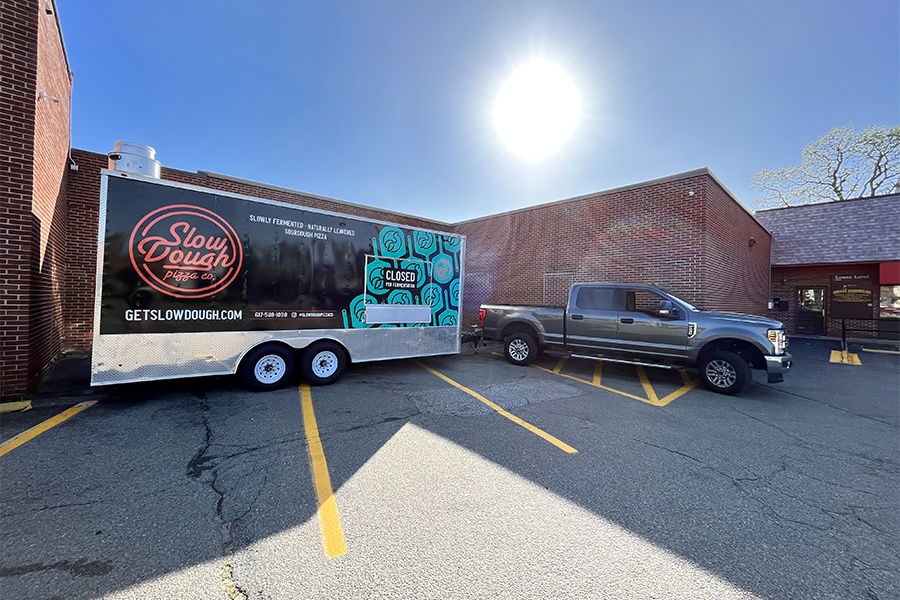 Like a lot of people, Ian Maschal was reconsidering his career path during the pandemic—and getting really into sourdough while spending more time at home. Two years later, however, he’s turning the hobby into, well, dough. And, unlike before, he’s working for himself. Maschal, a Boston chef whose résumé includes stints at high-profile spots like Eventide Fenway and Menton, is in command of his latest venture: Slow Dough Pizza Co., a takeout trailer operating a few nights per week outside of Newton Upper Falls Beverage Store .

Open for preorders and pickups since late May, Slow Dough specializes in artisan sourdough pizzas that are light and airy, yet crunchy and sturdy, and accented with high-quality ingredients including premium meats and cheeses, sweet Hatch chiles, and wild mushrooms. “I want a super crushable pizza,” Maschal says, “and to be the person running the whole business.” 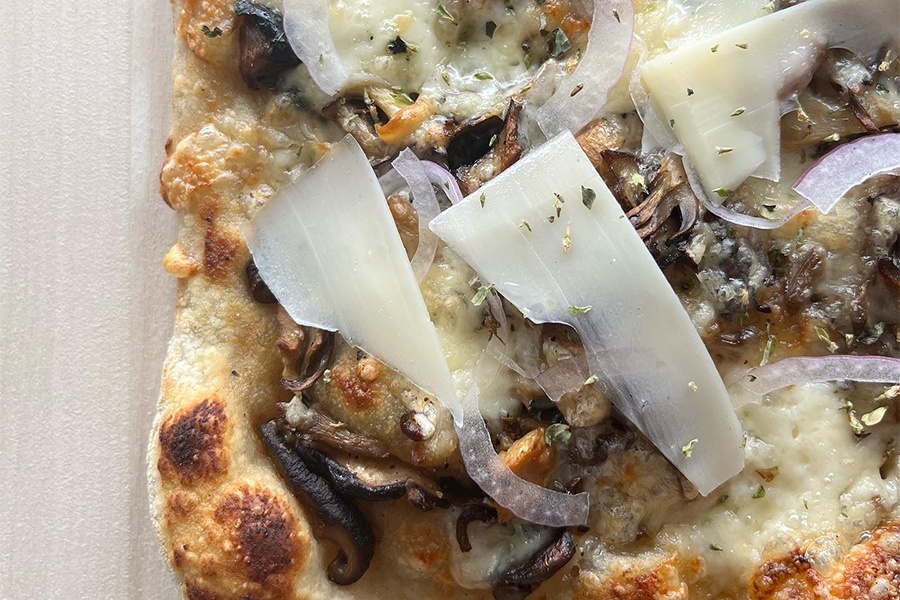 During the first winter of the pandemic—Maschal was at Ivory Pearl at the time—it took a step back from the industry and began cooking for private clients. Meanwhile, he was inspired by other chefs he saw on Instagram who were pivoting in creative, takeout-focused ways, like Tom Cardarelli, a one-time colleague from New York City restaurants, who debuted a stationary trailer-restaurant called Stracci Pizza in Alexandria , Virginia in early 2021.

Maschal visited Stracci Pizza for a day and tried their signature pie, finished with cool, creamy stracciatella cheese. Cardarelli “was incredibly helpful,” Maschal says. In addition to sharing his business plan and contacts, he also let Maschal know what he spent on the operation. “My apologies [for not opening my own restaurant] has always been I don’t have the money,” Maschal says. “Once I saw him do it, it seemed reasonable.”

Back in his home kitchen, Maschal armed himself with cookbooks and signed up for online classes with world-renowned pizza consultants Slow Rise Pizza Co. to develop his own dough recipe from their tips. “Someone would say, ‘I used this kind of pre-ferment and I noticed I get a stiffer crust with more air.’ That’s what I’m looking for, so I’ll try to do that,” Maschal explains of his research and development process. 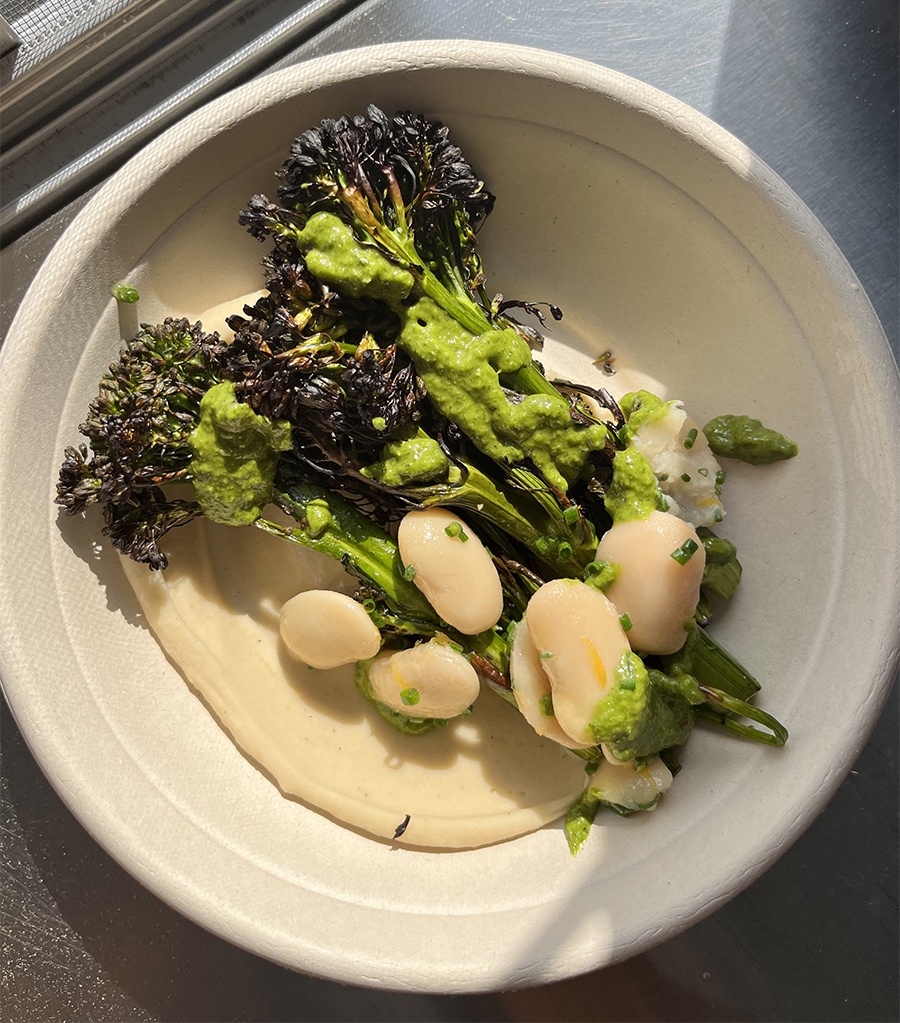 Years of working in other restaurants, meanwhile, informed the chef’s vision for the mobile kitchen. The Slow Dough pizza trailer was built to his specs: It features gas-powered deck ovens and other equipment, albeit bolted to the floor and walls so they stay in place during transit.

When it came to finding a home for his new operation, the chef connected with Mike O’Connell, owner of Newton Upper Falls Beverage Store and a fellow private chef. The two worked some events together and Maschal told O’Connell about his dream pizza trailer, O’Connell recalls. His family owns the property where the beverage store sits, and O’Connell thought a food truck could bring in new business. †[We] really just bonded over the catering and we want to see him succeed,” O’Connell says. 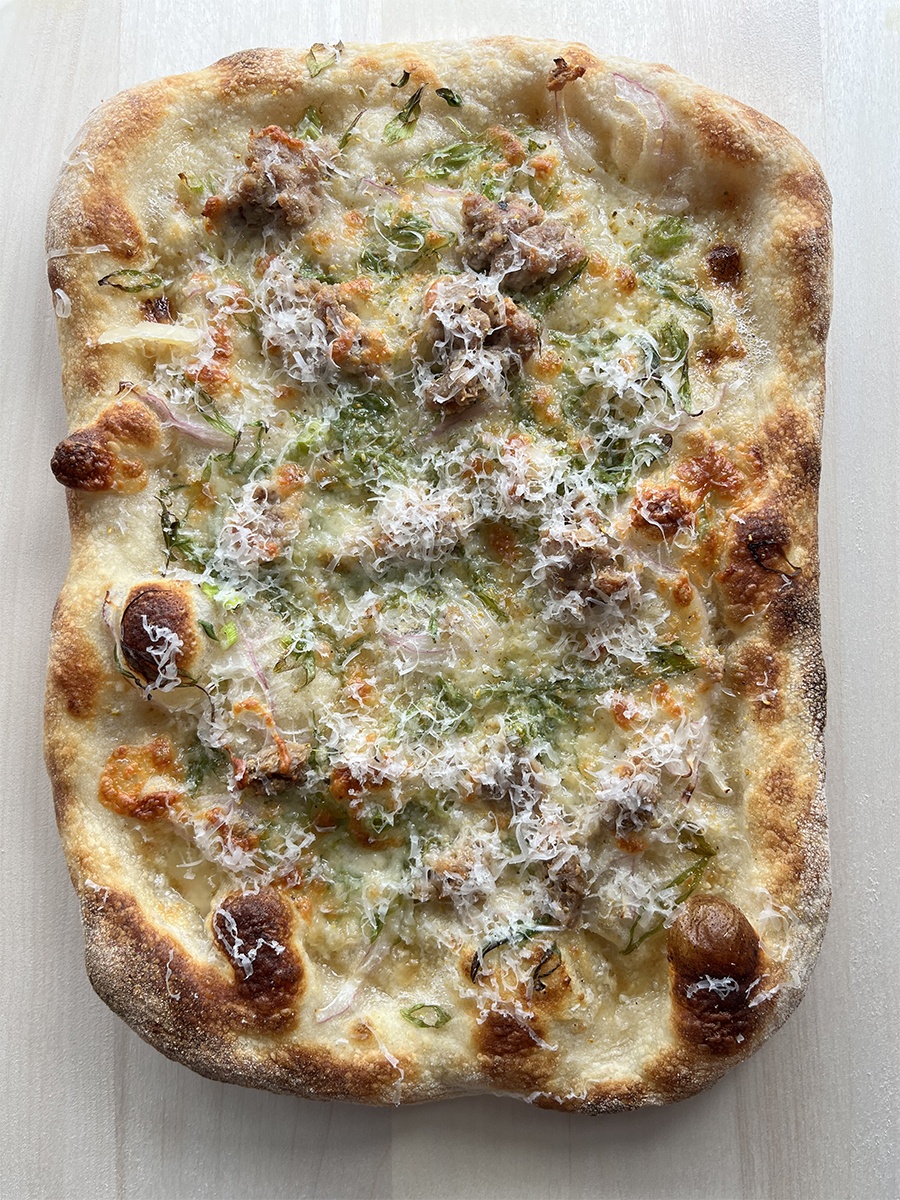 For Maschal, parking at the store provides water, power, and foot traffic—three ingredients for a startup owner’s peace of mind. Staying put instead of hitting the streets like a traditional food truck is another cue Maschal took from Stracci Pizza, which now parks its pizza trailer outside its own brick-and-mortar. “I want [Slow Dough] to be as close to a tiny restaurant as possible,” Maschal says.

In return for all the inspiration, Slow Dough has an ode to Stracci Pizza on its opening menu: House-made stracciatella finishes the OG Roni pie. Other menu hits so far include a sweet tomato pie with hand-grated mozzarella and scamorza cheeses, and Wasik’s Cheese and wild mushroom pizza featuring cultivated and wild fungi, saucy caramelized onions, and mascarpone from the venerable cheese shop. “I’m really trying to use spectacular ingredients that are local and seasonal,” Maschal says. He also offers rotating pizza toppings and side dishes, like a classic Caesar salad.

The chef hopes the takeout model will help him keep up the quality. Slow Dough Pizza Co. accepts preorders, and Maschal intends to eventually sell out of the dough he makes every day. He anticipates the trailer solidifying its hours from Wednesday through Saturday, but the schedule has been more sporadic since opening because of private events, which the chef intends to continue offering. Currently, Maschal and his wife, Jessica, are doing all the prep work and service. They update their hours weekly on Instagram.

For the chef, it’s so far a dream come true. “I’ve always had that drive of wanting to be the person running the operation,” Maschal says. “It’s freeing.”